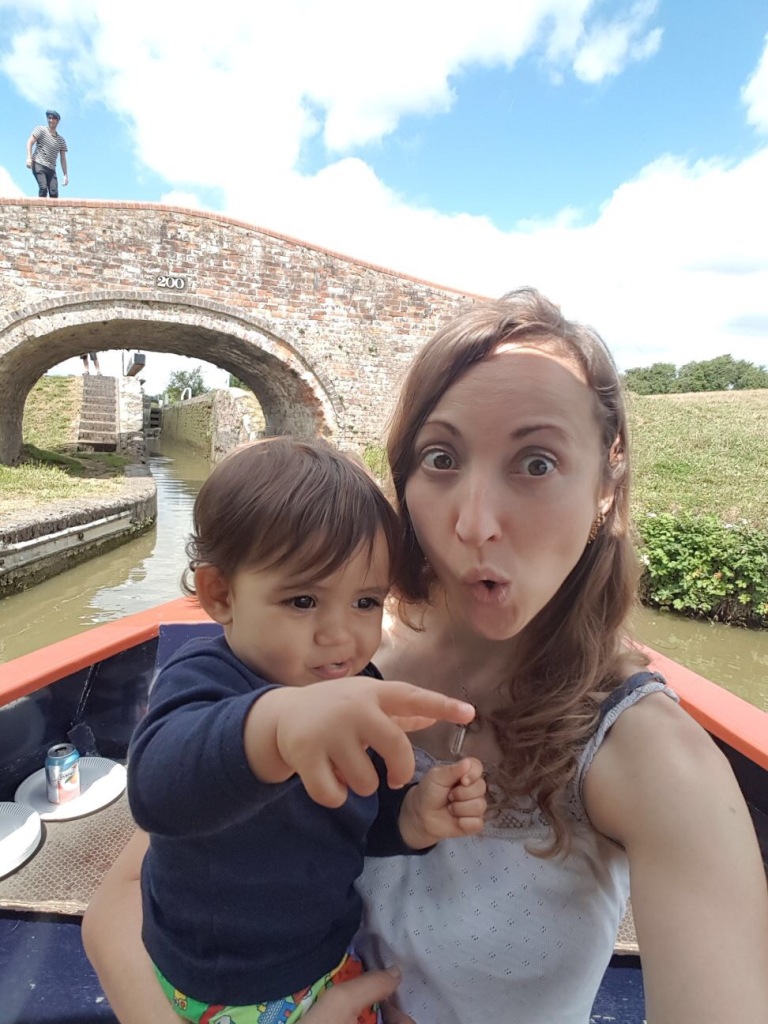 What does being a Woke Mama mean to you? This is gona sound cheesy but whatever, i’m not a vegan yet: being a parent with unimaginable love and kindness. But also with foundations in pure common sense and science. It is just the most natural feeling to bring up my baby this way, as well as to be as conscious as I can about the environment and social issues in the way I raise her. It’s her future – and with the way things are going with climate change etc, I hate the thought of her asking me: “Why didn’t you do anything about it, mum?”

What made you choose gentle parenting? And what is your favourite aspect of it? As soon as it really sunk in that I was pregnant (something about feeling car sick at 3pm everyday… yeah that’ll do it) and I started reading about positive/hypno birthing, the idea of doing stuff in a gentle, positive, kind way just made absolute practical sense to me.

But once she was born, i didn’t know what i was doing had a name until later on. It was nice to know that what we did naturally had a whole theory behind it that has such a positive outcome; creating happy, healthy, smart people. Can’t imagine raising a kid any other way tbh!

I love breastfeeding and babywearing so much which are typical “gentle parenting” aspects, but the best decision we ever made was safe bed-sharing. Not only did it save me in the early days because I could feed lying down and sleep through all the hourly night feeds (which *rolls sunken eyes* we still have at 10 months of course!), but nothing beats waking up to the most beautiful, twinkling pair of happy, adoring eyes waiting to play with you. It is next level, fluffy cloud, cheeping birds, 3D techni-colour magical heaven.

Most awesome moment so far? OK now this makes me sound like a show-off prick but it’s true. Seeing how happy iyra is (always possible to make her smile, even in the eye of a shitstorm) and how quickly she has developed — always learning new skills like crawling and saying “hello” months ahead of the average age — and knowing that is probably mainly down to gentle parenting, cus I’m sure as hell no genius. The same goes for all the babies I know, as they’re all so loved! The more love you give a baby and more reason for it to trust you, the quicker those synapses fuse together to create happy, confident tiny brains. And to think i didn’t get an A in science GCSE.

Biggest struggle so far? How do you cope with stressful moments? The only thing I regret so far is trying to fit in with Western society ideas of good parenting/doing what is “normal” here in the UK, such as sleeping in separate rooms. It made me feel like something was wrong with iyra, when I had never questioned her amazingness when we share a sleeping surface. The sooner i stopped that, the stronger we all felt.

And the best way to deal with stressful situations is hands down a kick-ass support network. Both the sweet, endless patience and kindness of my husband and our families, as well as the always-on-WhatsApp-whatever-the-hour, Girl Gang. You have to have a supportive network or gentle parenting becomes virtually impossible. You can’t give everything on your own. You’ll disappear into thin air! And nobody wants that.

If going back to work, how will you juggle gentle parenting life? Hoping to be able to breastfeed mornings and all night, but will continue generally as normal as I am lucky to be going back part time.

Any advice you would give to new mums? Don’t waste time worrying about sleep. It’s not meant to be all night until they’re toddlers unless you’re super lucky or do Cry It Out :*(. Also don’t worry about what other new mums you meet think about your way of doing things. You know what feels right. You are the only expert in the universe on your baby.

Oh, and other than white noise and Wonder Weeks apps which both run their course eventually, download Mush and Hoop for mates and places to go with them. Mothership network ftw.

What’s on your soundtrack to your first year of being a Woke Mama? I am well into music so I’m psyched iyra seems to be. In my belly she used to kick when I played Stormzy, Shut Up :D. Other than “happy baby song” (grr) the Elbow, Magnificent video instantly stops her crying on long car journeys — and she likes playing drums and synths and twanging electric guitars with my husband who is in a few bands.

For me though, the first few months of her life was soundtracked by Frank Ocean, Blonde, as that had finally just come out after a 4-year wait. But I’ve been making a never-ending playlist of music i’ve been into since she’s been on earth and it has everything from Chance the Rapper, Kendrick Lamar, Vince Staples, Danny Brown, Run the Jewels and A Tribe Called Quest to Grimes, Kilo Kish, Angel Olsen, Solange, Dandy Warhols, Male Bonding and Aphex Twin.

I used to listen to 90% angrier stuff like Jme, Leftover Crack and Death Grips but even though i will always still love dancing to them as that is my fave music ever, unless I’m needing to feel tough, having a baby has made me want more positivity in my ears. I’ll never forget that trippy experiment done by whispering positive words to plants and water compared to bad words. The plants that heard good words grew stronger, and the water particles were insanely beautiful. I am applying that to my own little blooming baby bud. We are what we eat, say, think and do. Peace.

Like what you see? We’ll be introducing more awesome Woke Mamas. Follow us on Instagram and share your stories with #WokeMamas. We want to hear what being a Woke Mama means to you. Send your answers to us here.

Sick of boring baby blogs? Join our awesome AF collective & raise a kinder world. Subscribe rn to get new posts to your inbox by hitting “follow” below. We love you 4 reals.

Cle is co-founder of WokeMamas.com. Baby iyra was born in 2016 and zia was born in 2018. They like skanking to punk, hip hop and tekno together. They want to travel the world but are worried about their carbon footprint. Peace. View all posts by Cle